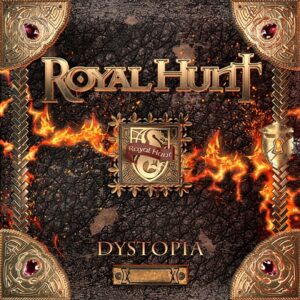 Denmark’s Royal Hunt have been around since 1989 and released their first album Land of Broken Hearts in 1992. More or less firmly rooted in the progressive melodic metal camp, their early days found them a tad more accessible than on later outputs. Fast forward almost 30 years and we have their most recent offering Dystopia, released in December of 2020. While I’m a fan of albums such as 2011’s Show Me How to Live and 2013’s A Life to Die For in particular, I wasn’t too keen on their last offering 2018’s Cast in Stone. Somehow the songs didn’t gel with me. Thankfully, the band has remedied this on Dystopia.

Royal Hunt’s sound has always been keyboard heavy, which may or may not come as a surprise, since main man and (I guess) main composer André Andersen’s instrument of choice is the keyboard. But don’t expect neoclassical wankery (although there’s a little of that too), as the keyboards are used more as a way to embellish the compositions. They create rich, lush textures and a smooth “wall of sound” for the other instruments to fall back on. I believe the term most appropriate to use would be “symphonic” (hardly a surprise, eh?). Every musician in the band is more than competent with his instrument and the songs come together nicely.

I am not 100%, but I’m pretty sure the album is a concept piece. As I do not have access to the lyrics, it’s hard to tell. But the intro is called “Inception 451”, which makes you think (even if you haven’t read it) about Ray Bradbury’s novel Fahrenheit 451. As the first real song is called “Burn”, and with the album title in mind, you’d be forgiven for thinking this is, indeed, about a society that has slipped and turned into a nightmare. “Burn” is an excellent opener, showcasing a memorable chorus and a rich and meaty sound.

“I Used to Walk Alone” starts of with a mellow piano, before female vocals set in. The song builds to a climactic chorus. The section around 3’00 features female operatic vocals, trading off with the male vocals, in a section that almost comes off as something Jim Steinman (Meat Loaf) might have written. This is good, by the way. An album highlight!

I realize I haven’t even mentioned the vocalist, D.C. Cooper. He’s good, with a slightly (actually it’s very present) nasal intonation and thus a voice that’s recognizable among a thousand. There’s something that can be said about originality AND longevity (he’s been in the band since 2011, and before that a spell between 1995 and 1998). It’s his voice that I’ve come to associate with Royal Hunt.

“The Eye of Oblivion” continues affairs in a most pleasant way with drama and pomp each getting their due, with a chorus full of pathos. If I haven’t mentioned it, all the songs are in mid-tempo, which suits the overall sound. Continuity is the word of the day. “Hound of the Damned” is ample proof of that. The end of the song features something burning, adding to the album’s supposed theme.

The album features two interludes, in addition to the instrumental opener, which might be one too many, but it is a petty quibble overall. “Black Butterflies” and “Snake Eyes” close out the album in an elegant fashion, featuring hypnotic riffage (the band has not forgotten they’re actually metal) and lush keyboard harmonics. “Snake Eyes” starts off with acoustic guitars and horns before turning into a smooth rocker. Somehow D.C.’s voice sounds rougher here, as if he were in a more classical 80’s rock band. A chorus that sounds hopeful (and catchy) adorns the song, which features some fretboard wizardry that also has that “dirty” sound. An excellent note to end the album on, if you don’t count the last interlude.

All in all, here we have a band that has returned to form, offering a capable, authentic and, most of all, enjoyable album. Recommended.