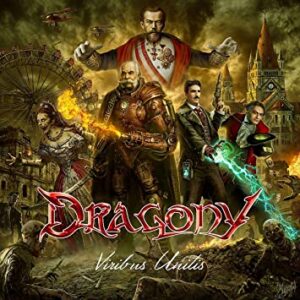 I’ve been following Austria’s self-described glory metal youngsters Dragony more or less since the release of their sophomore effort Shadowplay (2015). That was a very fine effort, a smorgasbord of the best European power metal has to offer. Unfortunately, while still good, the follow-up, named Masters of the Multiverse (2018) didn’t quite live up to the grandeur set by its predecessor. Not that it is a bad album in any way, just not on the level of what had gone before.

So how does the newly released Viribus Unitis (Latin for ”With United Forces”) fare? Very well, I’m pleased to say! Thematically it deals with the last monarchs of the Habsburg dynasty, including Emperor Franz Joseph I. and his ill-fated son Rudolf, Crown Prince of Austria. But it doesn’t end there. The guys in the band opted for throwing in some steampunk as well, as can be seen in the glorious cover art, featuring Nikolai Tesla as well as Houdini. But even though there’s a theme running through the album, it’s not overtly present, meaning you can enjoy the music without having to know shit about European history.

After an intro, the albums kicks off with two of the moodier tracks (relatively moodier, I might add, since we’re firmly in European melodic power metal territory here), namely ”Gods of War” (which I found a little bit lackluster in the beginning, but boy has it grown on me!), a brilliant opener with a dramatic flair and a catchy chorus, and ”Love You to Death”, which deals with the aforementioned Crown Prince of Austria, Rudolf, who committed suicide together with his lover Mary von Vetsera in 1889. Featuring yet another moody chorus, this song develops and reels you in the more you listen to it.

”Magic” is a song that sports the catchiest and most saccharine chorus on the album. Some might argue this is too flowery, but in that case, hey, call me the happy metal horticulturist. I for one love it.

The middle of the album features a real hattrick of pure European melodic metal  hits in the form of the songs ”A.E.I.O.U” (which stands for Austria Est Imperare Orbi Universo, or ”It is Austria’s destiny to rule the whole world”) and treats the listener to a guest appearance by fellow Austrians Serenity’s vocalist Georg Neuhauser as well as an anthemic chorus that may give some goosebumps; the title track ”Viribus Unitis” a short but sharp melodic metal grenade, and finally ”Golden Dawn”, a mid-tempo rocker with a truly catchy chorus (again! How do these guys manage to score hit after hit?).

The album closes with a cover of the (I guess) popular Austrian pop tune ”Haben Sie Wien schon bei Nacht geseh’n” (Have you ever seen Vienna by Night). I had to YouTube this song, and it didn’t really turn out to be a favorite … but kudos to the band for trying something unorthodox.

I won’t mention all tracks. They’re all good, but the standouts are the ones listed above (maybe not the cover though). What is fascinating – and commendable – is the flow and consistency with which these guys operate. Never do you get the feeling a song stands out in a negative way or breaks the flow of the album. All players deliver in their own way, but I have to mention vocalist Siegfried Samer who may have recorded his finest performance to date. These guys really have managed to carve a niche for themselves in a genre that’s become kind of crowded lately (which is mostly good). If you’re new to the band, this record would be the ideal place to start, and then go backwards through their discography. All of their albums have something to offer, but, as stated, the one that makes it all the way is Viribus Unitis. Hats off!