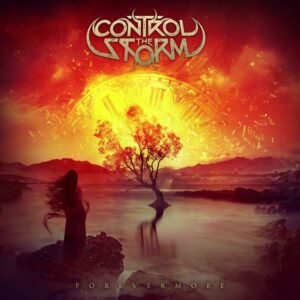 Now this was a nice surprise! Sometimes fate works in mysterious ways. As I was searching for another band (Evermore), I came across this sextet called Control the Storm from Bristol, England. They play melodic power metal with some symphonic touches, and man, do they know their stuff!

Forevermore consists of nine tracks, all offering a veritable smorgasbord where catchy choruses and exciting songwriting are concerned. Basically every song has that catchiness that is so essential to (European) power metal. Yet the band never repeats themselves, which deserves respect. And in Firouzeh Razavi they have a very talented vocalist who adds timbre and power to the tracks. I don’t know where they found her, but they’d do well to keep her! She has a strong, assertive voice, somewhat reminiscent of Sonia Pineault from Canadian power metallers Forgotten Tales, but at the same time she has a voice that is completely her own. I don’t know if that makes sense, but there you go.

And the songs! As previously stated, they’re all pretty basic melodic power metal tunes with the occasional splash of keyboard symphonics added to the brew for good measure. Some may call them derivative of band X or band Y, but that’s not a problem with me. Not if you pen songs this catchy and memorable. That’s what it’s all about, right? I know I wrote they’re exciting in the songwriting department, and I stand by that. Writing derivative songs is not a problem as long as they’re memorable.

Opener ”Darkest Fantasy” is one of the longer songs, clocking in at approximately seven minutes. It takes its time to build up to that pretty chorus, but when it hits – WHAM – you can’t help but smile. This is how melodic metal with female vocals is supposed to sound! Follow up track ”Strike to Defend”, features a chorus that is catchier than its predecessor, if that’s possible. The song is very brief, at least compared to the previous one, and leaves you longing for more. One of my favorite tracks off the album, if not the favorite.

”Follow Me” is basically a pop song coated in a metal finish, heavy on the choral background work. It’s all these small things that add nuance and shine to songs. Layered vocals, gang vocals in the choruses, key and tempo changes etc. The band has them in spades and knows how to use them.

”In the Night” is the mandatory ballad, and Control the Storm deliver the goods. Yeah, the song could be accused of being too sappy, but who cares? A ”hold your lighter high” tune. Razavi delivers a fine performance oozing with emotions.

”Chaotic Mind” has a really cool passage at about the 3:12 mark, followed by a sweet ass guitar solo. Generally the guitarists are somewhat restrained and tasteful when it comes to adding solos. This is appreciated, because when they do come, they rule. Another notch in the belt for these guys. They know how it’s done!

Generally the album features its best songs in the first half. Still, out of nine tracks, at least seven of them know how to put a smile on this dude’s face. That’s not a bad tally. And while the closing eponymous monster of a track doesn’t manage to convince me all the way, it’s still a fine and well-crafted piece of work. Starting off with a bagpipe, the guitars don’t kick in until around 2 minutes in. From there on, it’s smooth sailing over mid-tempo ocean, resting briefly in smoking guitar solo bay and, around the halfway part, a quick stop in piano interlude peninsula before the track comes to an end after about 13 mins. Solid work.

So, to sum it up: Forevermore is a respectable effort from a young band you should keep an eye on. I predict good things for these guys in the future. Until then, check this one out!