Evermore – Court of the Tyrant King

Album: Court of the Tyrant King 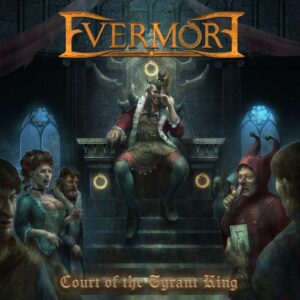 Sometimes a band appears, seemingly out of nowhere, and slaps you in the face with a debut album of such high quality you can’t help but be in awe. Some examples would include Sonata Arctica’s Ecliptica, Lost Horizon’s Awakening the World and Timeless Miracle’s Into the Enchanted Chamber.  And now we can add another debut to the pile, namely Evermore’s Court of the Tyrant King (doh).

This young band from Karlskrona, Sweden released an EP of three songs in the autumn of 2020, so technically this isn’t the debut, but that’s nitpicking. Those songs are featured on this album, as well as four new ones + an intro. All in all it makes for seven complete songs, and not one, I repeat, not ONE dud. Yeah, that’s right. All killer, no filler. It’s as if the trio gave all they had, poured every last drop of power metal into one chalice and offered it for you to drink. The album has a playing time of about 40 minutes and doesn’t overstay its welcome by one second.

So what do we have here? Seemingly ”basic” power metal, some uptempo, some mid-tempo and topped off with the curiously addictive vocals of Johan Haraldsson. The man was the last piece of the puzzle that began with two friends (Andreas Vikland and Johan Karlsson) jamming together before starting to write original songs. Haraldsson soon joined, and the rest is history. Yeah, I know it’s a cliche expression. So sue me. There is really no other way to put it.

I mentioned Haraldsson’s vocals. The closest comparisons would be Bernhard Weiß from Axxis, or maybe Jonny Lindqvist from Nocturnal Rites. Now these are only reference points, as Haraldsson has a voice that is completely his own, strong in mid-range as well as commanding and assertive in the higher registers. Actually it’s quite impressive how he manages to sound so secure even when he seems to be aiming for the stratosphere.

So how about the songs? All killer, no filler, he said, and he meant it. But I’d like to point out three favorites, if I may (yes, he may). The opening song ”Call of the Wild” is an uptempo affair about wanting to escape the dreary life of civilization, longing for the serenity that a life in the wild might offer. At least that’s how I interpreted it. Pay attention to the lyrics: They mean something.

Next tune up would be the title track, ”Court of the Tyrant King”. It doesn’t matter how long it may take; tyrants will fall eventually. I was reminded of Stephen King’s opus The Dark Tower when I perused the lyrics, curiously. Yeah, they’re based in fantasy, but there are still ties to, and ways to relate this to, the real world. These are the kind of lyrics I most enjoy in my power metal.

Lastly, we have the track ”My Last Command”, and among its brethren of strong songs, this may be the strongest of them all. I dare you to soak in that chorus and not shake your fist at the sky. It’s that damn good. As soon as the lonely guitar intro hits your ears you know the song’s going to be a cracker. The refrain hits you straight between the eyes, and you realize why I’ve lauded this band so much. They deserve every last ounce of praise.

So there you have it. A contender for album of the year, that goes without saying. I for one can’t wait to hear what these guys might cook up for us in the future. Mandatory listening for power metallers worldwide.  If you’ve found a better way to spend forty minutes, I’m all ears.