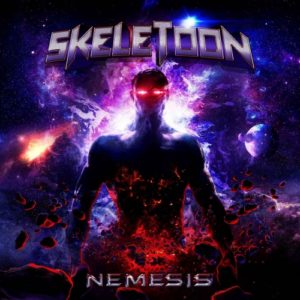 Some bands just don’t rest on their laurels. Case in point: Italy’s Skeletoon, who released their latest album, They Never Say Die (see my review here), a mere 18 months ago (that’s March 2019 for those of you reading this review at a later date). That album was a hearty and fun tribute to the cult flick The Goonies, coated in that sugary version of European power metal the Italians seem to be so keen on. And now it’s time for the successor, menacingly named Nemesis. There’s no menace here, however, but abounding happiness and positivity.

Skeletoon label themselves ”nerd metal”, drawing inspiration from comic books, computer games and movies, and Nemesis is apparently the first part in a three part sagas, the following two parts to be released over the coming years (oh joy!). If the quality of those forthcoming albums is anything like this album, we’re in for a treat. Actually, we’re in for a treat right now, because Nemesis blows They Never Say Die, an excellent album in its own right, right out of the water.

After a short intro, ”Brighter Than 1000 Suns” starts with a falsetto from vocalist Tomi Fooler, setting the bar for what’s to come. Double bass abounds as we’re led to a chorus that’s the epitome of happiness and positivity. A great start. Now, many power metal bands would follow the obligatory speedy opener with a mid-tempo track, but not Skeletoon. No, ”Will You Save Us All?” continues the high speed of the opener and treats us to a guest appearance by Alessandro Conti (Trick or Treat, Twilight Force) as well. The falsettos on this one are unreal, carrying that sweet ass chorus us power metallers so desire.

Only with the title track things are slowed down a bit. This is actually sort of the black sheep of the family, featuring some dirty guitars and harsh vocals in the verses, supplied by Melissa Bonny (Rage of Light). I really didn’t care for this track all too much in the beginning, but it grew on me, bringing the necessary dynamics to the album. Feels like I’m repeating myself here, but the chorus is really catchy too.

”Starseeker” brings us back into sing along land again. What a chorus! Not as fast as the two opening tracks, but equally anthemic. Now, I don’t have access to the lyrics, but from what I’ve managed to gather the whole theme of the album is heroes, and how regular people can be heroic given the right circumstances. The aforementioned track illustrates this beautifully. ”Cold the Night” is as close to a ballad as you will come, and if there ever were a time to bring out the lighters, it is now. Yet another brilliant chorus from the guys.

”Follow Me Home” is a merry speedster resembling something Freedom Call could do, without being an overt tribute. The guys of Skeletoon seem to like speed, and I’m not one to complain. Mid-tempo track ”Wake Up the Fire” is the first song I don’t really care for. I don’t know, it just didn’t gel with me. It’s got a nice guest guitar solo by Bill Hudson (NorthTale), though.

Now we’ve arrived at ”Il Tramonto Delle Ere”, undoubtedly the jewel in the crown, the cherry on top of the dessert. I could easily write a thousand words about this track alone, but at the same time, no words would do it justice. Sung entirely in Italian, this song is no ballad (which you might have thought, seeing other Italian bands – cough, Rhapsody of Fire, cough – having a penchant for penning ballads in their native language), but resides somewhere between mid and up-tempo. The title translates to ”Sunset of the Ages”, and features verses and chorus so anthemic and glorious they’ll blow your head clean off, and, yeah, it’s kinda cheesy but there is no better word for it: This song is heroic. It also features a shitload of falsetto singing (is there nothing Mr. Fooler can’t do with his voice?). Seriously, it sounds like he’s serenading life itself. You’ve just got to hear this. My favorite track of the album by a country mile.

Time for the mini epic (around 8 minutes long) ”Arcana Opera”. It starts off – yeah, you guessed it, speedily and features a chorus that gets stuck in your head like glue the first time you hear it. We’re treated to guest vocals by Giacomo Voli of the aforementioned Rhapsody of Fire, as well as guitar contributions by his band mate Roberto De Micheli. The song is very dynamic, with slower portions to complement the fast parts. Returning to the chorus, the song rounds off nicely. ”The Nerdmetal Superheroes” is a track that’s taken me a few spins to appreciate, even though I didn’t really care for it in the beginning. It’s somewhat reminiscent of Edguy’s earlier days, although being neither a parody nor a tribute. I reckon it will grow on me.

Rounding of the album is a more than passable cover of the Angra evergreen ”Carry On”, one of my favorite power metal songs ever. There is no replacing André Matos (R.I.P.) ever, but Skeletoon manage to stay faithful to the original in a very respectful way, so kudos to that!

To summarize this overly long review (yeah, I just can’t help myself when reviewing albums I really really love), what we have here is one of the best European (in both the geographical and genre sense) power metal albums released this year, and easily a contender for  album of the year. Skeletoon outdid themselves on this one, and I, for one, can’t wait to follow them wherever they go next. Nerd Metallers del mondo, unitevi!