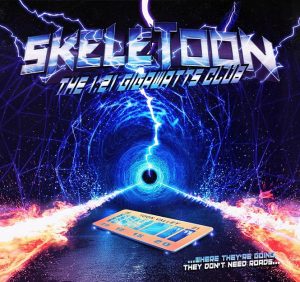 Third strike in as many years for these Italian purveyors of power metal pomp, and have they lost their stride? Has the well of creativity run dry? Not in the slightest! Where other bands may have run out of ideas, of catchy choruses and epic guitar riffs, Skeletoon just sail on, oblivious to all except bringing quality European power metal to connoisseurs of the genre. We should be thankful, really.

The 1.21 Gigawatts Club is a concept album, dealing with the 80’s cult classic film trilogy Back to the Future. A fitting theme, seeing how the band prides itself on being ”nerd metal”. There’s a lot of love for these cult movies in the execution of the material on hand. Once again the boys of Skeletoon bring us a variety of tunes all adding up to a sum that is greater than its parts. There are the obligatory speedsters (the opening tracks ”Holding On” and ”Outatime”), there are the mid-tempos (”The Pinheads” and ”Pleasure Paradise (Oh Là Là)”), and there’s the obligatory ballad (”Enchant Me”). All songs that are jewels in and of themselves, but as a collective pushes the concept and the story forwards.

As I’m a great fan of speedy power metal, the opening cuts – the already mentioned – ”Holding On” and ”Outatime” scratch that itch I have for sugary European power metal with catchy and memorable, not to mention anthemic!, choruses. Especially the latter track does it for me. Man, that chorus! And the ending wraps up the candyflossy (is that even a word?) affair in a most fitting manner. Frontman Tomi Fooler treats us to the compulsory falsettos that we’ve come to love so. A great start to the album!

The mid-tempo tracks that follow are good, especially ”2204”, but they have a hard time competing with the opening salvo. The ballad ”Enchant Me” works its magic on the first listen and just begs for repeated listens. I don’t think I’ve heard such a sappy (but in a good way!), cheesy and sentimental ballad in a long time. But it fits the concept, it feels natural, and it feels Skeletoon-y, so it works. This is the tune that will bring the lighters (or, in this day and age, cell phone flashlights) when played live, no doubt.

The other half of the album boasts two more great songs in ”Pleasure Paradise (Oh Là Là)” and ”The 4th Dimensional Legacy”. Mid- to up-tempo affairs, they bring yet more of those infectious choruses as the aforementioned Mr. Fooler works his vocal chords to the benefit of the listening pleasure. There’s really nothing more to say other than that these songs cement the record’s replay value in a most charming way.

Closing track ”Eastwood Ravine” is a mini epic, clocking in at little more than seven minutes. It deals with the last installment of the movie trilogy, as I’ve gathered, and it wraps the album up nicely. Did I mention that chorus will get stuck in your head? It’s hard to fathom how these guys can keep churning out consistently professional power metal and make it work over the course of not one, but three albums in three years. Other bands, and not only in this genre, would kill for that ability.

In closing, The 1.21 Gigawatts Club is yet another triumph for these guys. Granted, there were moments over the album that didn’t impress me as hard as others, and 2020’s Nemesis is a tough album to beat (I mean a song like ”Il Tramonto Delle Ere” is just ridiculous), but I do think it’s at least up there sniffing alongside it, and what more could you ask for?

Now, I don’t have access to the lyrics, but I imagine they follow the trilogy pretty close in theme. You don’t have to have seen the movies to enjoy this album, but I gather it helps. What’s obvious, though, is that these guys really revere the Back to the Future movies and furnish their tunes with love and admiration accordingly. One more candidate for album of the year? Probably. Yeah, I’m a fanboy. So sue me.