Joachim Nordlund’s Dreams of Avalon – Beyond the Dream

Album: Beyond the Dream 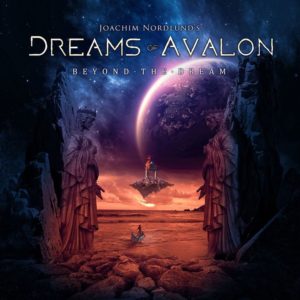 I don’t normally listen to a lot of AOR, much less review it. But as chance would have it, I stumbled upon a YouTube teaser of a band/project called Joachim Nordlund’s Dreams of Avalon, and I was very impressed indeed.

Dreams of Avalon is – yep, you guessed it – spearheaded by one Joachim Nordlund, guitarist of Swedish heavy metal band Astral Doors. Apparently Nordlund is a big fan of 80’s melodic rock / AOR, and it shows. On this, his first solo offering, I believe he plays most instruments and handles the vocals as well.

With this record you get, essentially, damn fine 80’s melodic hard rock / AOR of the highest caliber. Nordlund knows what he’s doing, and his passion shines through. It’s as if we’re whisked back to the 80’s, a carefree time when you could cruise along in your car and blast feelgood rock on your stereo (or, if we go back to the present, your mp3 player).

Basically every song on Beyond the Dream is a feelgood rocker that manages to inject a happy vibe into your day. Seriously, it’s as if you’ve been served a glass of pure sunshine or have had vitamin C injected straight into your veins. These songs are guaranteed to put a smile on your face and brighten your day.

What’s impressive is how consistent the album is. There’s nary a clunker here, and with most songs clocking in at 3-4 minutes, the tunes never overstay their welcome. Add to that the fact that Nordlund is very talented instrumentally as well as vocally. In fact, he has a very warm and likable voice. Be aware of the fact that this album is very keyboard heavy (which is so 80’s!), so if you detest synths, well, this is not for you. For everybody else though, you’re in for a good time. And the guitars are very present, treating us to the occasional slick solo, so this is definitely a rock album.

Picking out favorite songs is not easy, since they’re all of such high quality. But some of my choice cuts are opener ”Young Wild Hearts”, ”Under the Gun” (which is slightly darker, if that’s even possible), ”Shining Light”, ”Run for Cover”, ”To Paris and Back” and ”Stop”. Yeah, I’m aware that’s about half of the album, but as I said, the quality is consistently high.

I guess I’ll have to stop this now or run the risk of becoming too fanboyish. But in essence, this is a gem that any lover of retro hard rock / AOR is sure to enjoy. With autumn approaching this is a welcome complement to good old regular sunlight and vitamin C, all of which are so necessary. Easily recommended.